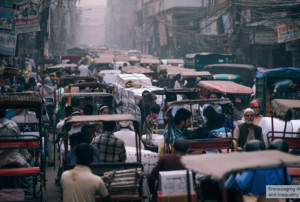 Encouraging News in the Fight Against Poverty and Inequality

Since 2008, the portion of the world’s population living in extreme poverty (defined as living on less than $1.90 a day) has fallen steadily, from 17.8% to 10.8% of the global total – which means about 800 million people. Much of this success has occurred in China and India where economic expansion has lifted millions. However, high growth rates have not resolved issues of inequality. In response, the World Bank announced two goals in April 2013: reducing extreme poverty to just 3% of the world population by 2030 and improving economic inequality by raising the incomes of the poorest 40% within each country. But how?

A partial solution, currently adopted by over 50 countries, is to provide cash transfers. While such programs improve consumption, they are not sustainable long-term. Ultimately, moving out of extreme poverty into sustainable livelihoods means developing an entrepreneurial venture that can support a household. For a time, microcredit was considered a panacea, but its benefits typically do not reach the poorest of the poor, especially women and girls, refugees, the disabled, and the geographically or socially isolated (due to caste or indigenous status).

So, what does work?

Most development interventions have not addressed the needs of the ultra-poor because they tend to be hardest to serve. They are socially and geographically isolated, own few or no assets, have limited livelihood prospects, and often suffer from poor health. But in 2002, BRAC, the world’s largest non-governmental development organization, pioneered a new methodology in its home country of Bangladesh. Now known as The Graduation Approach, it is a mix of interventions, offered in the appropriate sequence over 18 to 36 months, that will allow the ultra-poor to “graduate” out of extreme poverty within a defined time period. Its key ingredients include:

– Market analysis to identify viable livelihoods (options might include livestock, agriculture, carpentry, or crafts, depending on the local context)

– Time-bound cash assistance to support the family as the livelihood activity is launched (so that literal day-to-day survival is taken care of for a guaranteed period, ranging from 12 to 24 months)

– Seed capital or employment opportunities to jump-start the economic activity

– And crucially, personalized coaching to build confidence and reinforce skills while changing aspirations, expectations, healthcare practices, and even getting kids into schools

Between 2006 and 2014, ten organizations in eight countries tested the Graduation Approach under the leadership of CGAP (the Consultative Group to Assist the Poor, a World Bank policy and research center), and the Ford Foundation. Rigorous impact assessments and randomized control trials found it to be cost-effective and producing long-lasting change – unemployment rates decrease noticeably, self-employment rates more than double, and most households reach a monthly income equal or greater than the national minimum wage upon graduation. Most important, over half the participants report improved emotional well-being which persists long after the program has ended. The significant up-front cost was more than made up for by the longer-term economic viability and reduction in subsidy for these households.

Since its inception, the Graduation Approach has fostered partnerships and collaboration by merging aspects from three very distinct areas of development work: social protection, livelihood development, and financial services (development interventions generally focus on one area with experts working independently of one another). For example, the United Nations High Commissioner for Refugees is collaborating with the NGO “Trickle Up” to test the Graduation Approach in refugee settings.

Now there are over a hundred programs taking place in 50 countries based on the Graduation Approach. The next challenge is to introduce technology (notably a tablet-based application for the technical skills modules and a lot of the life skills) to standardize and reduce the cost of coaching.

The Graduation Approach is not “moving out of poverty.” It is moving out of extreme, destitute poverty into sustainable and holistic livelihoods in a way that really alters the social and economic dynamics for the participants. It is allowing communities to design their own goals and definitions of success. As stated by one international development expert, “that empowerment and sense of opportunity is probably the most astounding outcome for those of us who’ve been working on this approach.”